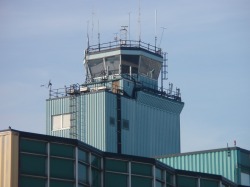 Ok, yet another airport that doesn't meet the criteria for my stated scope, but I happened to be driving by today and had some time to kill so I thought I'd drop in; besides, Air Canada offers scheduled service from Detroit Metro so technically, the Ontario connection is still there.  The first thing I noticed was that Metro was observing a code "Orange" level of security posted on a big sign as you approach the main parking lot off the highway. I wondered what that meant so I decided to investigate. After parking my car in the new parking garage (a very nicely designed building I must say, and much less of a maze than Toronto's) I went inside and approached the first security gaurd I came across. What's the code Orange stand for I enquired?-it's the normal level of awareness for security he replied. And the next up I asked?- code red he replied, which is essentially the highest state of alert. Anything lower than Orange I enquired? He didn't know. Had there been any code reds lately I asked? If there had been he replied, it wouldn't be posted for airport travellors. This seemed odd to me since if code Orange was the normal status, and code red wouldn't be communicated and no other levels were known by him, then what was the point of telling people that they were under code orange? Figuring he was probably a new hire, I proceeded to track down the next available security guard, coincidentally in the middle of a public address announcing that the airport was operating under code orange. Is there anything lower than code orange I asked? If there was, he wasn't aware of it was the reply-it seemed to him that the airport had been at code orange since 9/11.
Satisfied that no one really was too concerned about any safety threat, I made my way out of the terminal building and walked over to the control tower building which appears to have been the former passenger building for continental flights at one time (numerous abandonned airline counters line what is otherwise a deserted main floor), but was now empty with the exception of administrative offices on the second floor-it seemed like a huge waste of space given that there were only perhaps twenty or so people in the entire building. No one seemed to notice that I probably shouldn't have been in there. 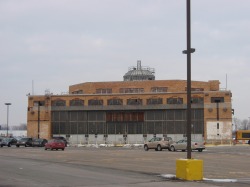 Some neat old derelicts of the past are still present at the airport including an old terminal building and the remains of the first service hangar and control tower, now referred to by the local car rental staff as the Pigeon Coop (after all of the pigeons that now make it their permanent hangar). It's a huge building, privately owned and presently occupied only by a large number of wrecked cars and salt piles for a local snowplow service. It sits removed from the airport in the middle of a car rental lot. The actual tower on the top of the building is empty and it's a bit of a shame that no one has made any effort to salvage a unique structure from what was once a part of one of America's earliest airports.
There's also an old tower adjacent to the local police station, I believe to be at least 80 years old, which appears to be an airport identifying tower that would once have had a light beacon on it to guide pilots to the threshold of the runway. These towers originally marked the pathways of the first air-routes across the continent until someone realized that cloudy weather made them fairly useless. I imagine the ones closest to airports were the last to be taken down. 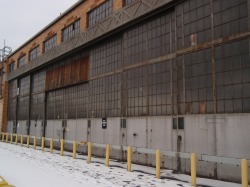 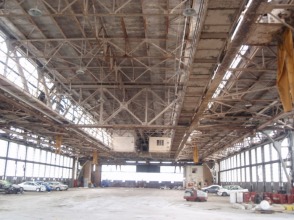 I let myself in the side door of the hangar and took this shot of the cavernous space inside. 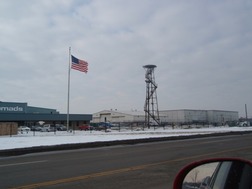 This old light tower sits adjacent to the local police station very close to the threshold of one of the main runways and has probably stood there since the 1920's. Of course, now it's simply a pigeon roost. 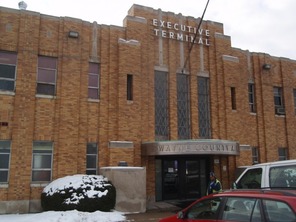 I believe this is the original terminal building, a very nice art deco architecture which was very popular for airport buildings during the 1920's and 30's. The two blocks on either side depict a carving of the Wright flyer on one side and an Stratoliner on the right. 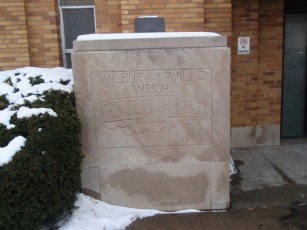 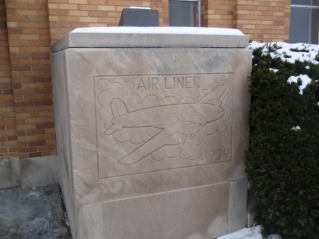 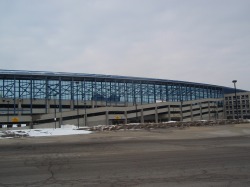 As parking garages go, I have to say that this one is really a great design-functionally it's easy to get in and out, and aesthetically, it's just a nicely designed building somewhat similar to the cross-section of an airplane wing. Not sure if that was intentional or not..