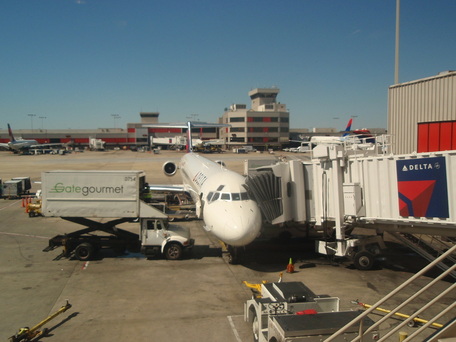 This week I spent a little time in Atlanta Georgia, home of Coca-Cola and the nation's busiest airport, thanks in part to it being the home of Delta airlines. After joining with NorthWest in 2008, Delta is now the largest airline in the world, operating out of the world's busiest hub-and it shows. Make sure you don't ask for Pepsi in the airport restaurant.

If air travel is any indication of the health of an economy, the line-up of planes leaving Atlanta mid-day when we left on Wednesday certainly suggests that things are improving in the US- when arriving and departing, I noticed that the planes were stacked up both in front and behind us, all vying for space on the twin main runways. Four behind us and two in front from this shot as we taxied for departure.

A very efficient underground system of escalators and subway make getting from one terminal to the next quite easy. Like many airports, the large spaces in between make for very nice public art displays. I read somewhere that airports are the cathedrals of the 21st century and Atlanta's airport certainly supports the observation.