Canada's lost V-2 rocket and a Canadian icon's role in it's capture. 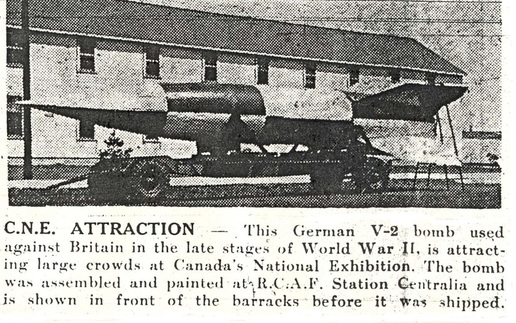 photo with kind permission of Wally Feydenchuk
Harold Skaarup is an accomplished Canadian author who first brought my attention to a fascinating story about a reknowned Canadian author and his remarkable contribution to WW11 military heritage in Canada.
In the closing days of World War 11, Farley Mowatt was a bored soldier looking for something to retain his interest in Allied occupied Europe. As luck would have it, his suggestion to his superiors to collect samples of the German war machine was met by approval and soon he was combing the continent in search of examples of advanced German technology. Both the British and Americans of course, had the same intentions with the Americans and Russians especially interested in anything to do with German advances in rocketry. In fact, their desire to acquire anything related to German rocketry was so focused, that the Americans soon announced a monopoly on all captured rockets so that they could bring them back to the United States for testing.  As luck would have it, Farley would soon find an opportunity to "reclaim" a V2 rocket from the British and bring it back to Canada as a war prize. At war's end, The US brought significant numbers of German, Japanese and Italian aircraft back to the US, many on the US warship "Reaper" for testing and evaluation. Freeman Field in Indiana, as well as the Air Force base in Dayton Ohio, were where the majority of these aircraft were delivered to, and any of the ones that survived, ultimately ended up at the Smithsonian (some remain in long term storage there, unseen since the 1940's by the public-see my Udvar Hazy page) and other war museums-the majority were scrapped or lost. The photo below shows one of the captured V2 rockets as well as other cutting edge German war machines including the Ju-388, and the rather unsuccessful and dangerous to pilot, Natter rocket plane. The one pictured below is the sole remaining example and is in long term storage at the Paul E Garber facility in Maryland. 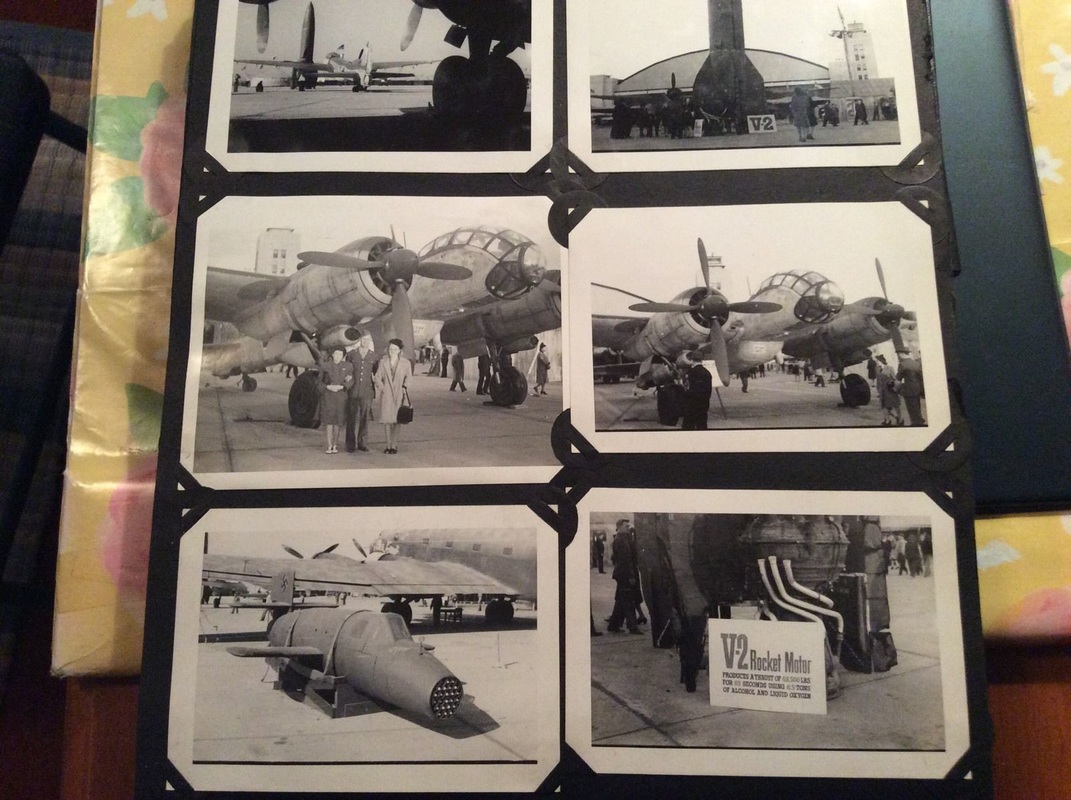 From the collection of Ray Smyth, reproduced with permission.
But a V2 rocket in Canada? As a huge fan of Canadian aviation history, I'd never heard of this story but soon discovered that, yes, the rocket had been brought to Canada, reverse-engineered and subsequently lost/misplaced, never to be seen again. Without a rocket, my skepticism ran pretty high since Farley is known to be a good storyteller but after conversations with numerous Canadian history buffs, one kind researcher forwarded me the photo above of the rocket at Centralia airport, north of London, Ontario and I was convinced. But how had the rocket made it's way to Canada and where had it disappeared to- after all, it can't be easy to lose a 3 storey, 12 ton rocket.
A phone call to my alma mater,  the University of Western Ontario provided me with the next logical step- although the Canadian history professor was also unfamiliar with the story, he had the obvious suggestion of speaking to Farley himself. Although he was 91 at the time, Farley Mowatt was still quite active and lived in my same area code. Cold calling a famous Canadian author takes a little nerve and my initial attempt was met with a not unexpected rebuff commonly experienced by most telephone solicitors. Farley did hold out the prospect of responding to me via a letter so I promptly forwarded my questions and within a few days had my answers (and a now cherished typewritten letter by my favourite Canadian author). After apologizing for his phone irritability and waving it off as a consequence of "old age and a sore ass", Farley clearly still remembered the events surrounding the V-2's capture.
Farley recounted how his team found a German train loaded with V2 rockets and parts near a forest in Germany, apparently deserted by German troops in their haste to escape the Allied advance. After getting it's British guards drunk, the Canadian team proceeded to roll the rocket off the side of the train (it was one of the last cars and out of the field of view of the now drunked soldiers) and onto a trailer which they then brought back to Holland and a waiting cargo ship. Knowing that the Americans would confiscate the rocket if they discovered it, Farley's team used some Canadian ingenuity to disguise it as a German submarine, complete with a wooden conning tower and propellor-no questions were asked when they loaded it up onto a Liberty ship for the trip back to Quebec. Farley recounted how they drilled a hole into the nose of the rocket and power-washed the explosive material out onto a field and then set it off with a charge. Instead of exploding, the charge went off with a simple whoosh rather than the expected bang (as he recounted it probably would have done that had it exploded over England).
The next piece of the puzzle was where had it gone after that? The newspaper photo in Centralia would have been taken after the rocket was reverse engineered in Valcartier but the newspaper article indicated a trip to the CNE. Surely, this rocket would have drawn a lot of attention and photographs to boot. Sure enough, although few photographs seem to have survived, an enquiry to Lisa Cobon, Manager of Records and Archives at the Exhibition place revealed that the rocket had in fact been on display at the fair. A comparison of photos from Centralia and the CNE reveal that the rocket is the same one. 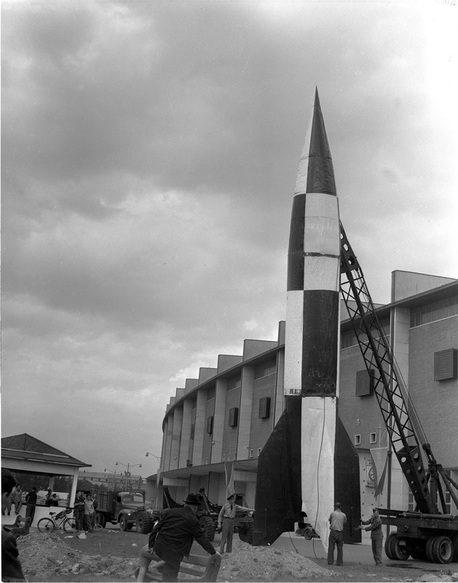 photo by kind permission of CNE and Exhibition Place Archives, Alexandra Photo Studio Collection, neg # MG5-28-4 and MG5-28-6
Erecting the 3 storey V-2 in front of the grandstand building at the CNE 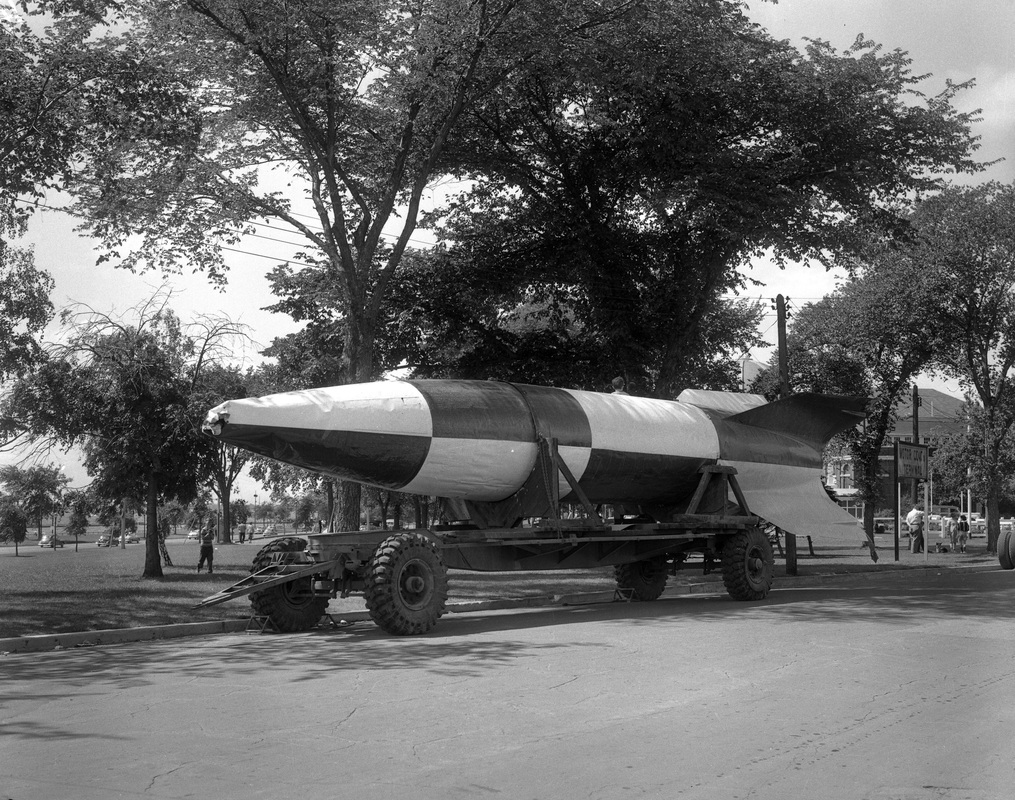 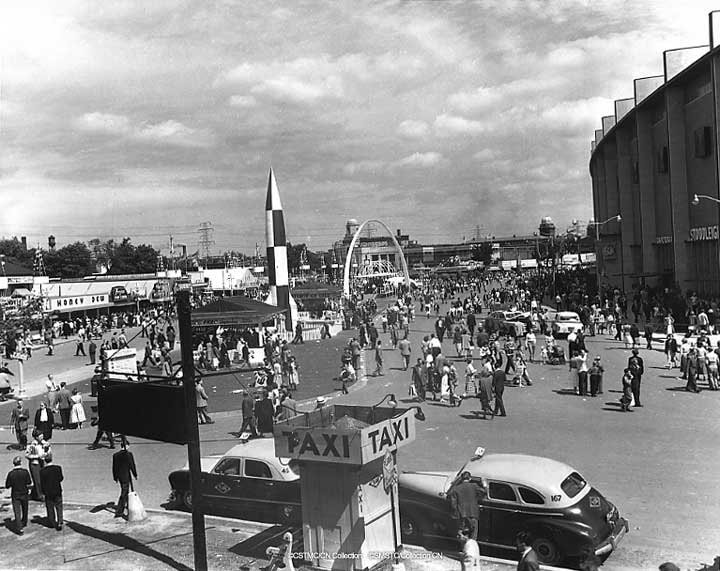 After it's display at the CNE, the trail of the rocket's path becomes unclear. Correspondence with Canadian war museums and aviation collections could not shed further light on the rocket's final resting place although some interesting theories existed.
A number of researchers I spoke with surmised that the rocket might be the one that guarded the testing grounds in Aberdeen, a well known testground for the military in the United States and was later transferred to the Smithsonian . A enquiry to their public relations department yielded the response below:

Mr. Das
Our V-2 Rocket was acquired in October 1998 from the U.S. Army Center of Military History.  It was formerly on display and storage at Aberdeen Proving Ground.  The artifact was transferred to the NMUSAF without any provenance.  We cannot verify the history of the asset or original construction number.

Could it possibly be that the rocket was Farley's V2 and that the American military just didn't want to acknowledge that this one came from Canada? A search for a photo of the rocket revealed that the rocket and carrier at Aberdeen did not resemble how Farley's rocket ever looked like, and so this theory was effectively quashed. 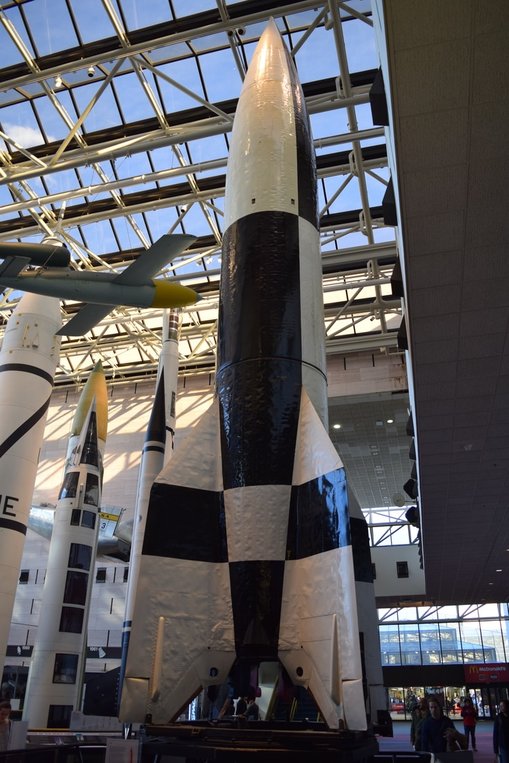 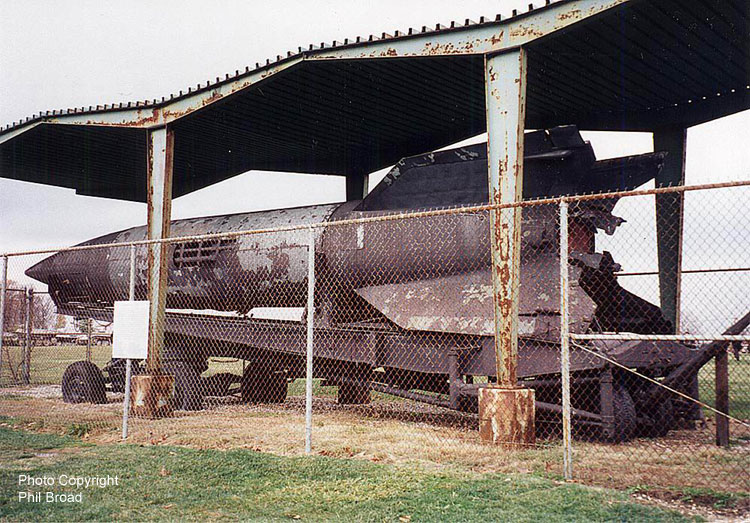 photo by Phil Broad
Another rumour held that the rocket was shuttled to various RCAF bases throughout Ontario and may have been buried at one of them-certainly, the War Museum in Ottawa was aware of this possible outcome but was also entertaining a story from some ex-Froeign Affairs employees that the rocket had been given back to the United States and even test fired- the prospects of finding the rocket were not looking good. A post on an aviation forum blog would prove to be the first lead to a possible rediscovery of Farley's rocket when it was revealed that a long time resident close to a Candian airbase recalled that the rocket was buried on the base dump.
Unfortunately, the local resident was no longer of sound mind according to the guys at NAFM so further proof would be needed.
The further proof came in the form of an enquiry to a gentleman who had posted on a Canadian aviation forum about growing up on a Canadian airbase where his father worked. He retold how there were six hangars, three owned by the RCAF and three by the army. In one of the army hangars had been a German V2 rocket until the early '60's. It could only have been Farley's rocket. More surprisingly, he also revealed how the rocket was ultimately bulldozed into the airbase dump!

An airforce museum volunteer writes about Picton airbase:
Apparently, the Royal Canadian School of Artillery (Anti Aircraft) took over the base for several years. But on July 1st 1960 the base became Camp Picton and 6 weeks later the RCSA disbanded and two new units were formed the 1st Surface-to-Surface Missile (SSM) Battery and the 2nd SSM (Training) Battery, both of the Royal Regiment of Canadian Artillery. They both moved out at the end of 1961, the 1st to Europe and the 2nd to Camp Shilo . The Camp became Canadian Forces Base Picton in April 1966 and it was the home of the Canadian Guards until September 1969 when it was sold to Piasecki Aircraft of Canada  for $260,000 and the Craig Barracks, which were constructed post-war, were sold to the Province of Ontario for $1,000,000 for use as a hospital. At a guess I would think the V-2 might have been used in some manner by the 2nd SSM (Training) Battery . I would guess that the V-2 either finished up on the Picton Base dump or it moved on to Camp Shilo .The remnants of the base dump still exist


April 2015: It seems that I'm not the only one who suspects the V2 is buried at Picton:  http://ottawacitizen.com/news/local-news/king-farley-mowat-and-the-story-of-canadas-lost-nazi-rocket
November 2018 Given the relatively small area the Farley rocket is likely to lie within, it's hard to believe that the War Museum would not have sufficient interest to invest in a search of the former airfield to try and uncover the resting place of the buried rocket- after all, the Harper government spent over 10 million dollars looking for the wrecks of the Franlin expedition and had no idea where they were. In addition to the V-2, it is likely that the dump would yield a wealth of aviation artifacts that back in the 40's, 50's and 60's would have been deemed unworthy to preserve for historic posterity. 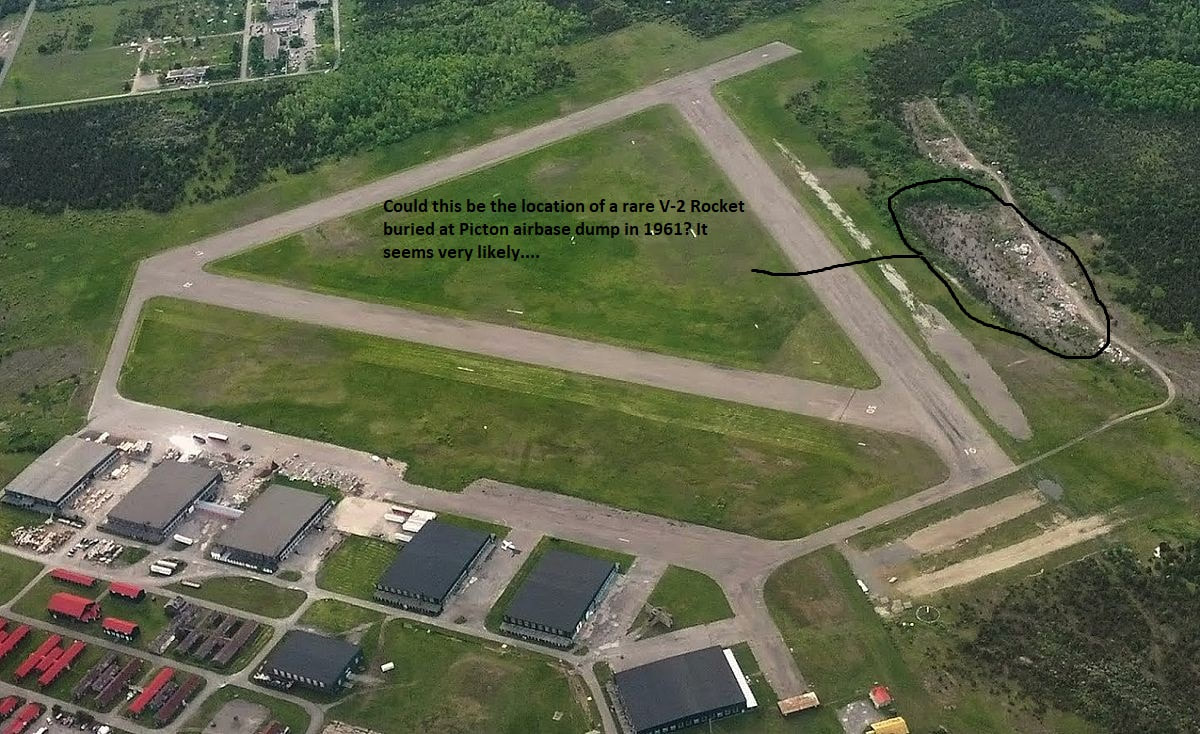 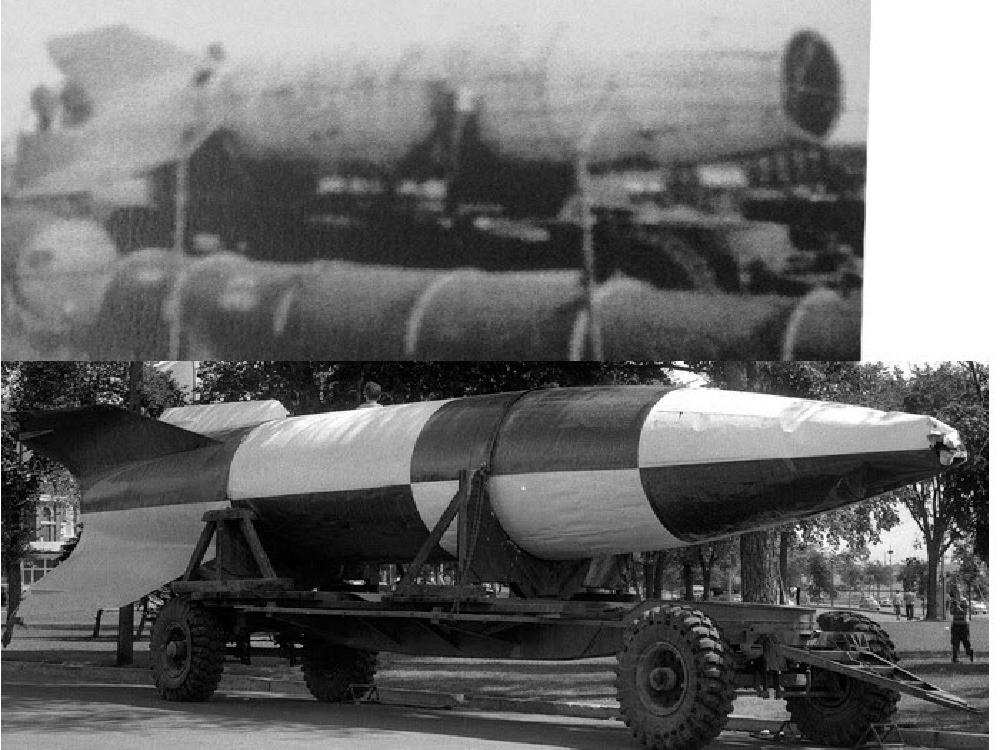 V-2 rocket at Picton in 1961 top with the Farley rocket at CNE below...they are the same ship. 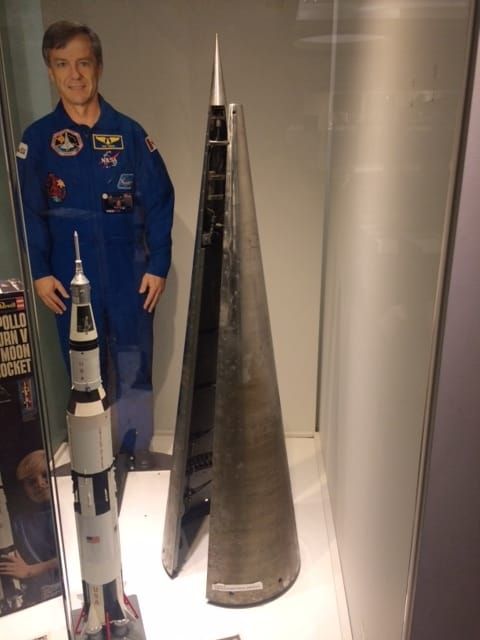 Apollo rocket model alongside a nose cone from the Canadian Black Brant rocket.
According to Farley, the V-2 rocket he brought back to Canada was reverse engineered and much of the information gleaned from that went into the development of the Black Brant rockets, an original nose cone of which appears on display at Pearson airport. Looks like it would be a pretty close match to a V-2 nose cone!