Chino airport is a mecca for aviation enthusiasts-I was expecting a decent aviation collection but was really surprised to find not one, but  three amazing museums, and the most impressive thing is that ALL of the planes are restored to airworthy condition. This is a location not to be missed if you're anywhere in the area, with well over three hundred planes to be seen. A modest sampling of my favourites below.... 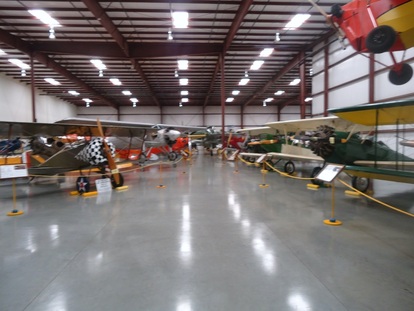 The flightline off all original aircraft as you enter the pre WW11 showroom, all of which fly.
My friend John Wheeldon recently visited the Chino museum and recounted this story of his visit to the museum:


"En-route from Las Vegas to L.A. we stayed in a town called Merino Valley for a couple of nights. I discovered that there was an air museum about 35 miles away in a town called Chino. Jeannie was quite happy to let me ramble over there for a solo visit while she went shopping and put her feet up by the pool. Oh! happy days. I found the museum quite easily and made my way through the exhibits which are arranged chronologically. A wonderful display of fully restored and most to flying certification. No rush at all. I have all day here. Eventually I enter the WWII arena and alongside a brace of gorgeous Mustangs stands this magnificent B-25. One of the few aircraft that day which was manned by a guide/narrator. The young man was holding audience with several people when I arrived so I gave them some time to disperse before entering into conversation. It transpired that his name is James and he is a volunteer at the museum. Around 20 years of age and still in full time education he just loves being around vintage aircraft. But more, we started to discuss the social changes which took place during the war years with such events as women entering the factories and the contributions they made to productivity and QC etc. I was quite taken with this dialogue and entered into a lengthy discourse with him. After a little while he asked me if I would like to climb on board and he would take my photo from the deck. This I can only liken to the invitation I had in Malta to board their Spitfire. A privilege. After the photo he climbed upstairs with me into the co-pilots seat where, despite a gathering crowd down below wanting to chat, we held the most incredible discussion on matters such as the stress relieving of perspex after forming to prevent shattering and optical distortion, chromating, phosphating, anodizing, and the electrolytic reaction between dissimilar materials particularly in hostile climates! Very rarely can you discuss such stuff with an adult but with a 20 year old? Eventually, reluctantly and sweating like pigs we decided to deplane as there were quite a few people milling around. On the way down I could not help but think of crewmen in the blazing heat of the Pacific waiting for T/O instructions. After bidding farewell and climbing back under the rope barrier I was approached by a couple in, I would say, their mid 40's who asked me if I had found it interesting? I remarked that it had been a riveting experience, looking up at all the rivets in the aircraft and pardoning the pun, and the young man, who is only a volunteer, can tell you anything you would like to know about the airplane and probably about any of the other aircraft in the museum. As I walked away I turned and approached the lady who had asked me about the presentation and I said,  "Thinking about it, I have the warm feeling that if we are leaving the World in the hands of young lads like him, I think we have done a pretty good job. But please, you be the judge when you chat with him".  Her mouth was agape and I looked at her husband who was in tears. I looked back at her for comment and she said, "that is our son".We parted, all speechless.I met them later and we had a very warm chat. I also had a good long talk with the Curator and the Historian of the museum who confirmed James's commitment and enthusiasm and their desire that he will make the museum a career. I think he is destined for even greater things however.
We are now in San Diego, and have met a very pleasant lady who introduces us to her son and wife. All local people, her son teaches maths at Nazarene University. He is telling me of the difficulties he encounters getting his students involved and enthusiastic in the subject matter. I related the story of James from above. And I had a counterpoint in the two young men of similar age I overheard in Honolulu.
"So, tell me again, what is the big deal with Pearl Harbor?""Oh yes, that was where the Japs dropped their first Atomic Bomb on us".
All are good looking. clean cut, well spoken American Boys. All, I'm pretty sure with the same educational opportunities open to them. All with the internet at their fingertips. The question to pose to your students may be, "who would you prefer to be?" He asked me if I would mind him using the story and of course I agreed. If only they would listen.
My good news story of the day." 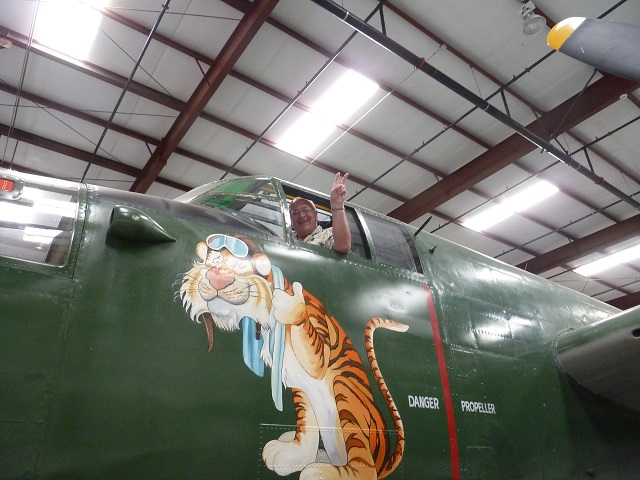 John enjoying the view from the B-25 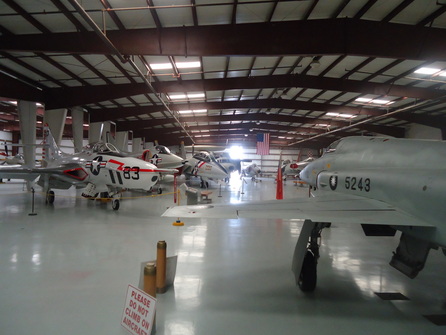 A portion of the modern era flight-line; all of them in flying condition. Canadair F-5 in the foreground. 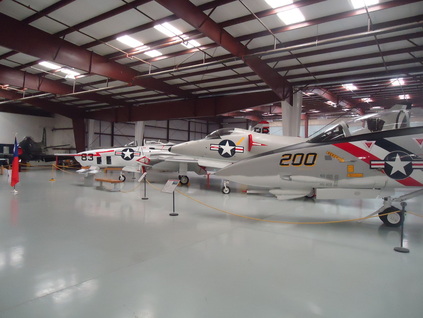 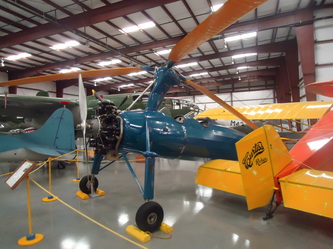 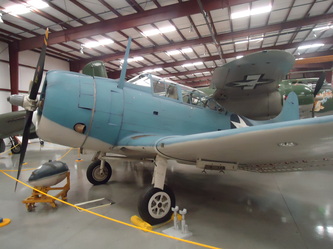 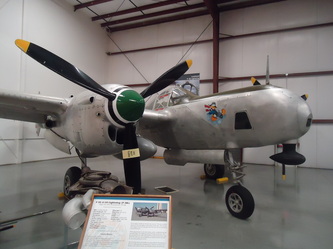 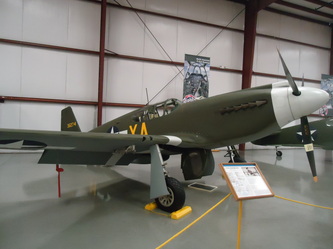 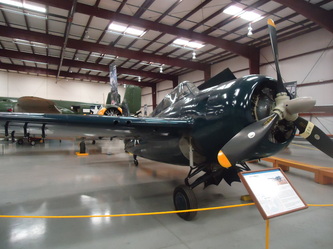 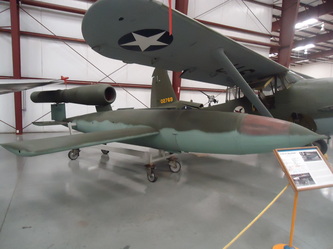 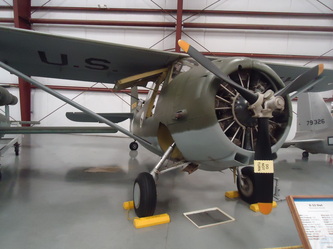 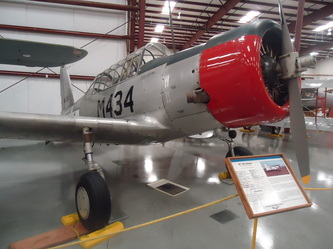 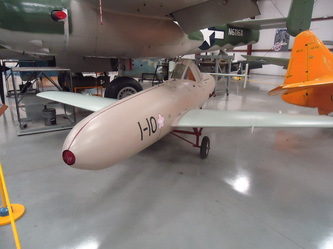 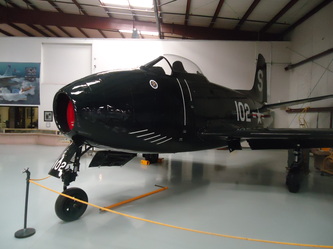 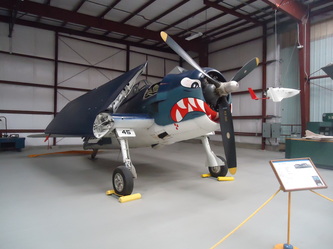 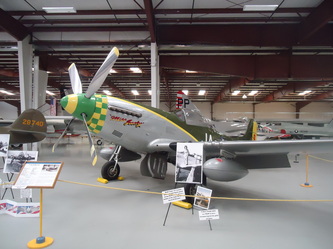 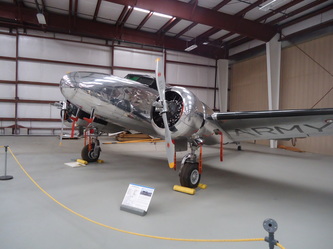 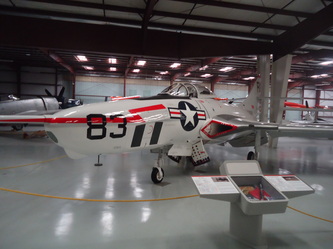 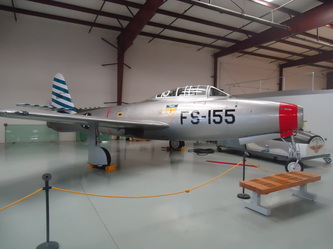 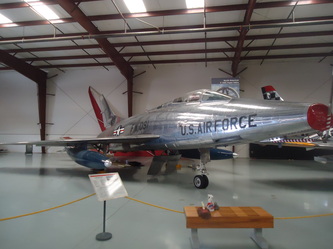 More in the backlot... 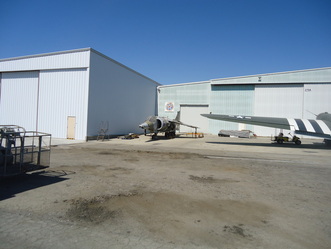 Harrier jumpjet that's seen better days. This''ll be a tricky one to keep in flying condition given the fuel it sucks and the skill level required to fly it. 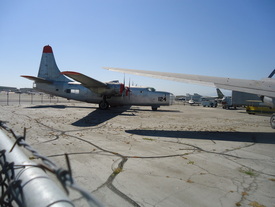 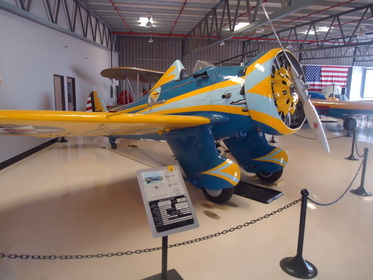 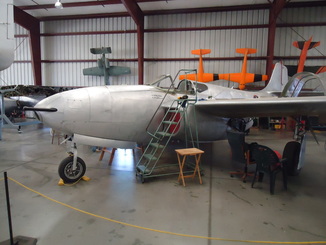 This was America's first kick at a jet fighter using technology gleaned from German fighter planes captured during WW11. This one was number 10 off the line. When they were first brought out to the desert to test, dummy propellors were placed on the nose to avoid suspicion. See my page "Niagara Falls" for more on Bell Aircraft and the secret plant in " Buffalo's Tri Main building" pages. 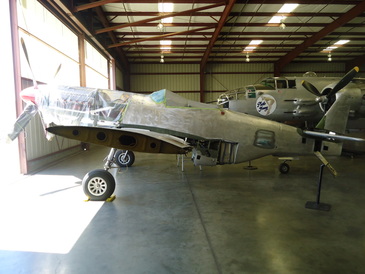 A rare Mustang project. Yet another B-25 in the background. 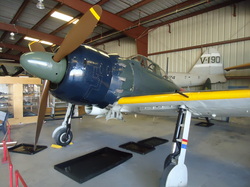 I believe this is the only original Zero in airworthy condition, in original colours. This particular plane was testflown by Charles Lindbergh upon it's return to the US to get a feel for it's flying characteristics. I think it bears a close resemblance to Howard Hughes H-1 racer. 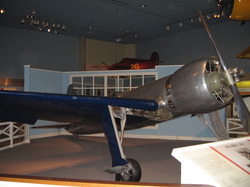 Not the same plane, but you can see the influence on the Japanese design from the H1. This original racer is located at the Smithsonian Institute in Washington. 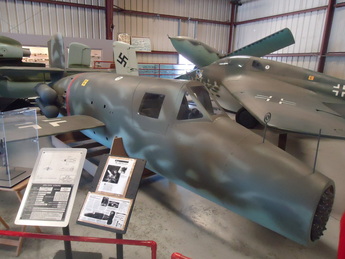 Three jets/rockets that might have made for a significantly different outcome for the Allies had they been further along in development. The one in the front (Natter) launched vertically from a tower. 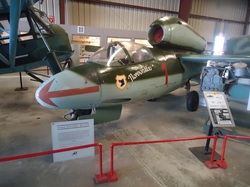 Another remarkable German fighter jet, well in advance of anything the competition had at the time. 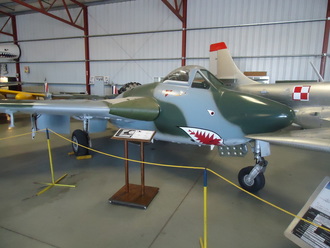 I have to give the nod to the museum's Vampire jet, also Canada's first fighter jet.