The sport of Falconry 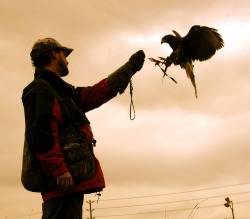 The Falcon 50 may be arguably one of the most famous business jets ever to fly, but it's namesake is no less impressive a flying machine. My friend Dave House enjoys  flying his falcon most weekends and might spend in a lifetime, the equivalent of an hours worth of fuel of the former, while enjoying his sport. Dave's birds are trained  to hunt (typically rabbits) and in conjunction with special hunting dogs which he uses to ferret the rabbits out of their hideouts, he and his son (and wife too)  enjoy the fun to be had watching cute little bunny rabbits go up against his tag team killing-machine hunters in a match with outcomes weighted not unlike Bambi versus Godzilla. (Bambi doesn't stand a chance). Of course, pilots know that air supremacy is always the trump card. 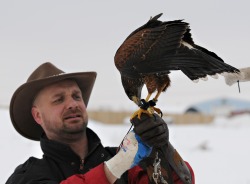 Dave handling his bird with the requisite care that is required when you hold onto a bird who's claws can easily penetrate to the bone (thus the special gloves)
Dave recounts a recent hunting expedition with his Falcon, Booger, dog Alley and wife Tanya at the homestead of a local farmer who'd asked him to rid their property of a couple of problem rabbits:

I tossed Booger up into an old maple tree and we started kicking shrubs with Alley doing her best to go through them.  Booger was following really well and paying really good attention to what we were doing.  A huge snow covered Juniper bush was our first target and within seconds of Alley entering it a rabbit bolted and ran the perimeter of the property under the pine trees (they go all the way around the property)  with Booger putting in twice through them but not connecting.  We put the rabbit up again and this time Booger just missed it and it made it back in the Juniper bush.  Alley could not confirm it was in the shrub because the smell of evergreen now was all we could smell from the first flush, so we moved on to the flower bed in front of the porch.  The farmers wife came out very happy as she witnessed some of the flight and was letting up know where there could be rabbits.  Booger was off to the side in a pine tree and came over to sit on the porch roof to watch Alley in the bed.  Sure enough as we talked a rabbit bolted and ran out in the open with Booger putting in and missing, he was up and tried again before the rabbit hit the wall of pine trees to be lost.  We all ran to the front yard to head off the rabbit and as Tanya went to kick, it made the Juniper.   We all stood there laughing with the farmers wife as it was quite comical.  She went in the house and we continued to search around the house but kicked up no more bunnies.  As we stood in the back yard Tanya suggested that we should kick around a pair of pine tree beside us but I suggested that since Alley had chased both of the previous rabbit right through them that there wouldn't be any rabbits under them.  Sure enough as we continued to talk about the chases we were interrupted by the screams of a caught rabbit.  I ran around the side of the tree to find Alley chasing/catching/chasing/ and recatching a rabbit,  I heard bells and new I was going to have company so I grabbed the rabbit and tossed it over my shoulder to the open yard hoping to give Booger a chance at catching it on his own.  Needless to say it became a circus!  I didn't realize it but Tanya had rushed in behind me and about 6 feet away she go the rabbit off the head before it hit the ground.  The rabbit made a break for it but only made it 10 feet and was nailed by Booger.   We all laughed again and looked over to see the farmer and his wife looking out the window at us.  We traded Booger off and went to the door to say we were done for the day.  Turns out they had only caught sight of the rabbit running and the hawk catching it,  Tanya was quite happy about this as I was too because I could at that point hear in my head what I was going to be called behind closed doors    :-) We were asked to come back again and finish the job,  so all is well at the House's today, at least after Tanya took a couple pills for her headache..... 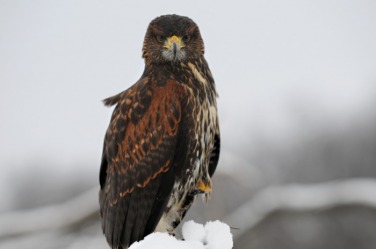 Booger (I didn't name him) enjoys a little downtime Falcon 50 below. Both nice birds. 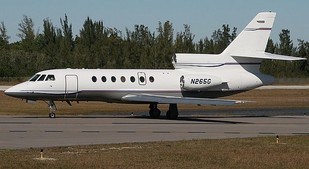 So, I've been corrected in my comparison with Dave's bird as a "Falcon" to the Falcon 50 business jet. Dave's bird is actually a hawk, which is a specific species of bird distinct from the Falcon. The sport Dave enjoys with his Hawk however, is called Falconry. If you want to get really picky, Dave is technically an Austringer (person who flys hawks rather than falcons) but the terms have been used so loosely that over time the use of the term falconry has come to apply to anyone who flys a bird of prey. I still think the Falcon 50 looks "hawkish"