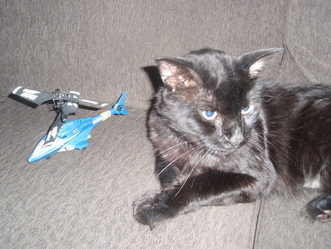 Matsa and Playbuddy
I've been recovering from back surgery and slowly going stir-crazy staying at home so I decided the other day that I should take advantage of my recuperation and enjoy my flying indoors. While the RV-4 languishes in it's hangar, I decided to try out the sport of remote control model airplane flying.
As a novice, I'll start small-I bought a small AirHog
remote control plane a couple of years ago but found that although it flew quite well, the batteries would die much too quickly to really enjoy it. Figuring that the technology must have improved since then, I made my way to Walmart's toy section with son in hand, to buy him (ok, me) a remote control plane. I don't normally like to shop at Walmart (I defy you to find more than 10 items that weren't made in Japan) but AirHogs are a Canadian owned company sold there, so I make an occasional exception. Turns out that the latest AirHog offering is actually a helicopter and although I had my heart set on a plane, the missile firing option was enough of a deal-maker to drop the approximately $50 for model and sufficient batteries to start shooting...i mean flying...I mean pounding the air into submission.
The AirHog helicopter is actually a quite ingenious design; counter-rotating blades permit the helicopter to fly without the need for a tail rotor. Controls allow you to fly up and down and also to effect gentle turns left and right by changing the angle of attack of the top rotor. Of course the nuances in control were lost on my almost three year old son who of course likes to run the machine full throttle until the bird climbs out of radio range, loses power and crashes-fortunately it's a styrofoam body.

The problem with my AirHog is that the propellors really require alot of power to keep the craft aloft so the flying time is not considerable-maybe five to ten minutes of fun, and the lithium battery seems to hold a charge less and less over time so i think I'm going to have to pay a visit to my local hobby shop and take the next step up in remote control flying-i'll post my experience here in the near future.... 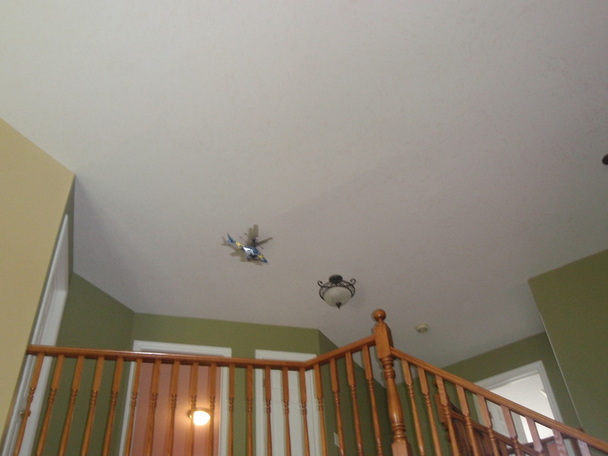 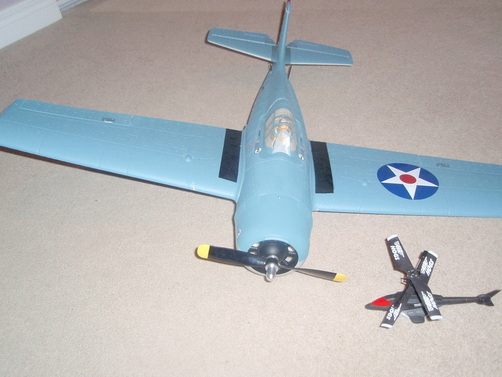 OK, the fun with my helicopter has run it's course, so I figured it's time to take the next step up in RV flying- the F4 Hellcat seemed like a good choice. Of course, it's a little bigger than my AirHog (see photo) but I always liked this one as a kid and a recent Ebay auction for a real won reminded me of this model as I pondered other options at my local hobby store...the admirable thing about the Wildcat was that although it was slower and less maneouverable than it's nemesis, the Japanese Zero, it had a unique feature; the self-sealing bladder type fuel tank,which allowed it to withstand hits to the fueltank without exploding, and heavy armor that the Zero lacked. This model is made by a company called Parkzone which makes a quite realistic replica down to the pilot's name-Lt O'Hare- inscribed below the cockpit. Lt O'Hare gained fame during the battle of the Pacific by leading some Japanese scouts away from the American carriers even though it meant that he would have insufficient fuel to return himself. His name is immortalized in aviation history at Chicago's main airport.

Turns out, I should have gone home. 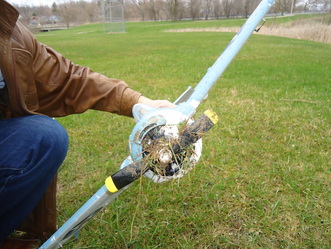 So, nephew Jonathan, Erik and I took the plane up for an inauguraL spin and unfortunately the flight was just that-three or four laps around the field and one spin into the ground. At least the field was wet and a significant amount of the crash force was absorbed. Back to the drawing board.
Fortuitously, most of the parts you can break crashing these planes are available to order one part at a time on ebay-I'll probably invest in a bunch of propellors.
The plane flys great though and quite fast as well.