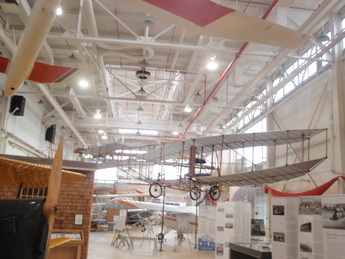 December 2016
I first wrote about Downsview museum shortly before they were evicted for falling 120,000 behind in rent at their historic DeHavilland factory location at Downsview Park. The museum's entire collection had to be packed up and stored (thanks to the generosity of Air Canada) offsite, unseen by the Canadian public. Since then i've waited anxiously for over five years for them to find a new home but as time passes, I can't help but think that the Museum's failure is due to a well meaning but inept volunteer group who lack the resources to move things along, short of some kind of miraculous windfall that will never come. Most recently, I observed they turned to a kickstarter campaign to raise $500,000, clearing $8,000 by the most recent post I can find. So a museum board with no real sources of revenue and apparently no money to spend on a new building waits hopefully for a sugar daddy to come to their rescue.  No communication online means no progress except repeated empty promises about being close to major announcements that never seem to materialize. Here's a suggestion for the Downsview team; donate your collection to the Canadian Warplane museum in Hamilton who actually DO seem to know how to run an aerospace museum and pay their bills. Combining both collections into one large Canadian collection would create a truly world-class aerospace museum and ensure the historic aircraft that have been stashed away unseen for the past six years can once again be viewed by everyone-as they should be. Don't wait once again until you're too far down the hole and your landlord's (Air Canada's) gracious hospitality reaches it's end. At least that is the way it looks to a casual observer.

Downsview has to be one of the most historic airports in Canada and continues to build on that legacy through the current owners, Bombardier, who occupy a large portion of one corner of the airport across the field from the original DeHavilland factory which now serves as the Air and Space museum. Sadly, the museum is facing eviction by a lot of shortsighted land developers who want to replace it with a hockey rink. The good news is that a new site adjacent to Pearson airport has been located but in the meantime, the collection is languishing in ocean containers in a Toronto parking lot. I'll contribute 20% of all sales of my Avro Arrow T-shirt (check it out on Ebay) to a future new home for the museum.  My trip one wet afternoon before the collection was remove was with the intent of seeing the reproduction Avro Arrow which is housed in the former DeHavilland factory where Tiger Moths were once built. The Arrow model did not fail to impress-the Arrow (even as a full-scale replica) is still a sharp looking jet over fifty years later, and was worth the $11 entrance fee. Parked adjacent to it was a Lancaster bomber currently under reconstruction as a static display. The afternoon I was there, a former Lanc pilot was on hand to recount some of his experiences. One interesting comment he made was that contrary to popular belief, the Americans were not the only ones flying daytime bombing runs and that all of his missions but two, were during the daytime-in his opinion, the American pilots, although very good, (he was trained in Arizona) were not generally proficient at night time navigation and therefore flew during the day. If yo u would like to help contribute to a new home for the museum, you can find more info at the museum crowd-funding site at: 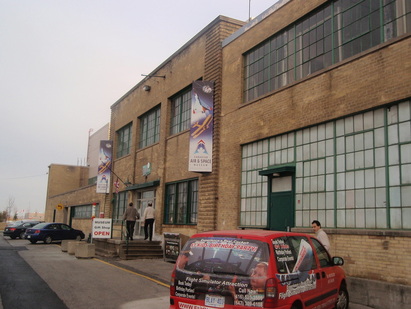 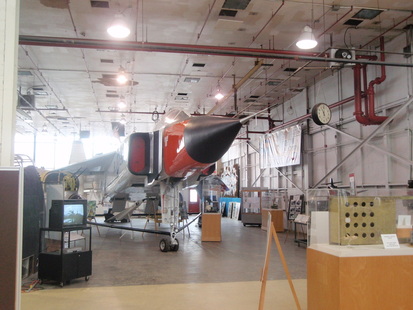 Scale mock-up of RL-203. It really is a big fighter -unfortunately it was a tight squeeze to get it to fit in a hangar originally intended to build Tiger Moths so even the ceiling had to be cut open a little for the tail to fit. I couldn't get around to the back side for a shot from the back... 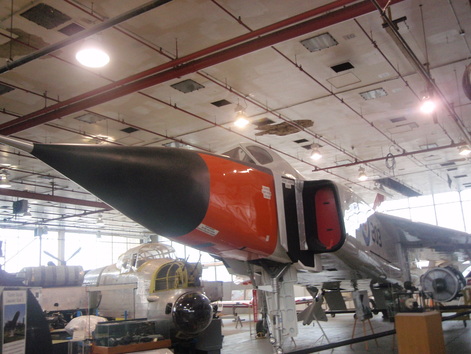 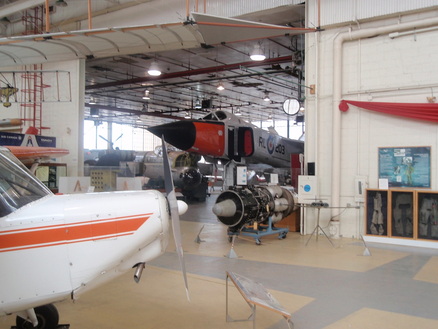 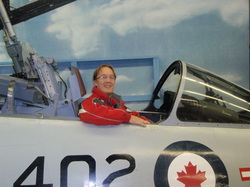 Ok, it's supposed to be for kids but who can resist? 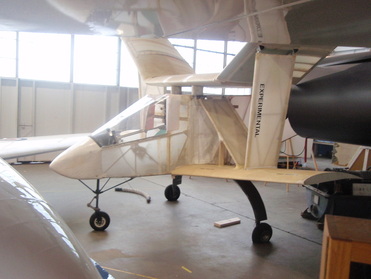 Here's a nice little gem tucked away in the corner underneath the Arrow-the world's first and only flapping wing-design, pedal-powered airplane, which actually flew with FAI recognition. Named after the other jet adjacent to it, Snowbird. Check out the video of it flying http://www.theregister.co.uk/2010/09/23/pedalo/ 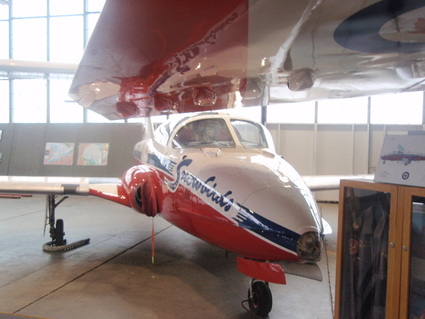 Ornithopters namesake, just a little faster but probably less fuel efficient. This one is done in the colours of the Canadian demonstration team although it never flew as part of the team. 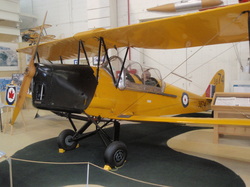 This nice original Tiger Moth which was actually built in this factory graces the entrance. Over 1500 were built within this unassuming building. 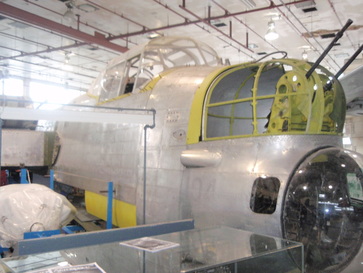 This project looks like it's going to be quite a few years before the museum staff will have to worry about a display area for it. this bomber used to grace the Toronto waterfront but thankfully, it was removed and brought indoors. 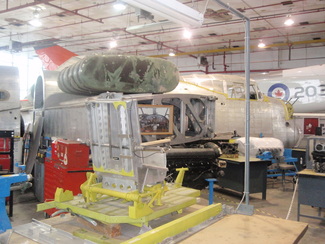 Lots of Lanc components litter the warehouse. i'm not sure what they'll do with it when it's finished because there certainly isn't enough room in the existing hangar for an assembled bomber. 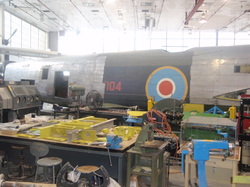 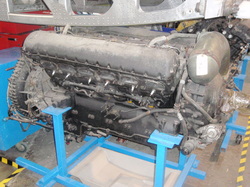 One of the four original engines. 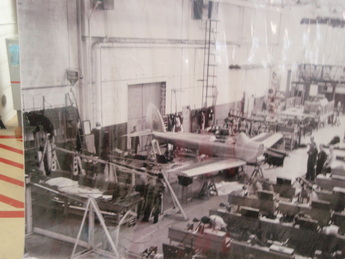 A photo of a photo of the old DeHavilland assembly line and the current space in the museum today below with an Orenda engine in the foreground (in the second photo of course).. 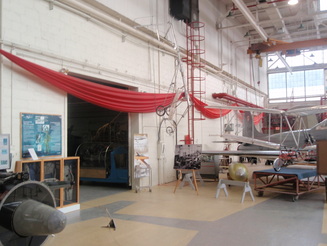 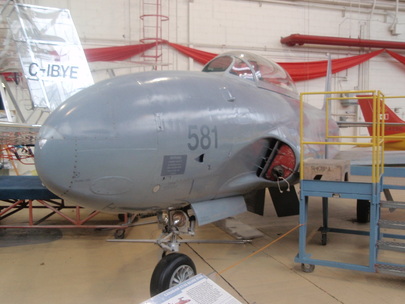 A T-33 jet trainer, Canada's first jet trainer of which two squadrons were based here.
' 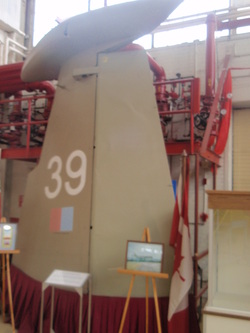 In 1995 a British Nimrod crashed into Lake Ontario during the CNE airshow and the subsequent investigation and re-assembly of the plane was performed in this hangar-the tailfin remains as a reminder of this tragic accident in which all the aircrew were killed. http://www.youtube.com/watch?v=m2BSfgnCU2Q 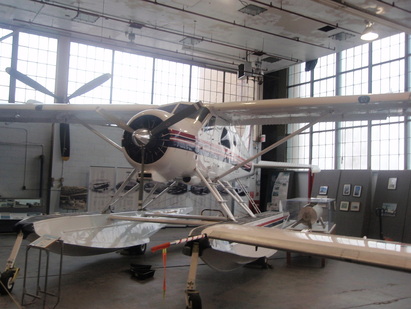 This Beaver is privately owned and flies regularly in the summer but it makes an appropriate addition to to the museum during the off months.

View from back of the hangar 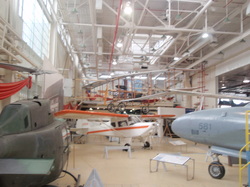 Reproduction of the Silver Dart, Canada's first airplane hangs from the rafters. 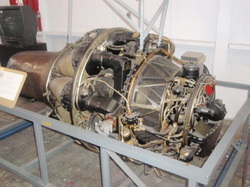 Another Canadian aviation benchmark-jet engine from the Avro Jetliner. 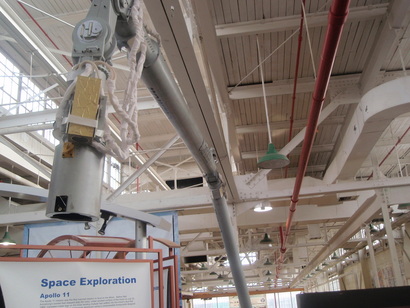 One of Canada's contributions to the space shuttle program was of course the CanadArm, a 2/3 version which sits in an upper alcove of the museum.

Close the door-there's a draft. 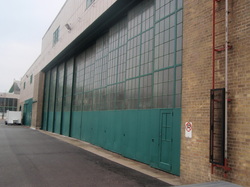 I always thought that the old style hangars were underappreciated as very nice architectural design-this would have been the main access door to the runway from the De Havilland plant back in the day. 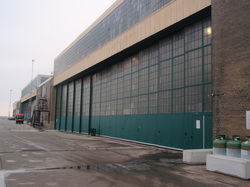 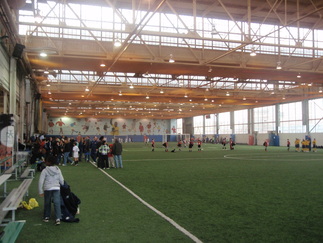 Apparently, I'm not the only one who appreciates the design of these old hangars-many of the large, old hangars have been converted into a sports complex, housing everything from indoor soccer to go-carts and squash courts while still retaining the original structure . The guys in Detroit could do well to copy this idea (see my Detroit page) 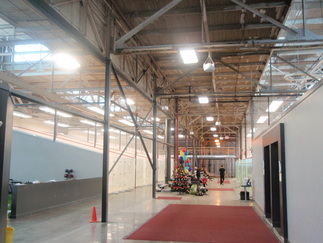 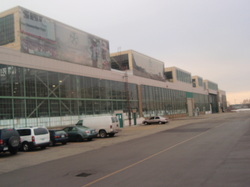 Anyone with original photos of the hangars with associated aircraft, please send them to me for inclusion here. (ed.das@rogers.com) 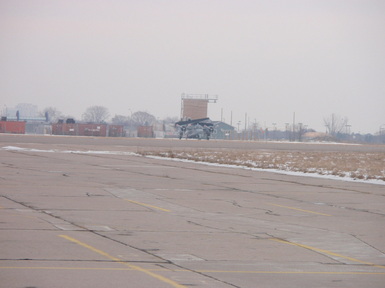 I spotted this lone Tracker with wings folded across the field-yes, I have a cheap camera. Apparently the museum does not have quite enough space to keep it indoors. 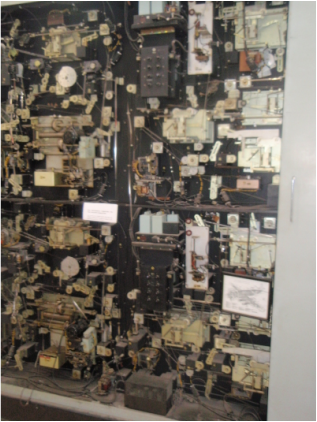 I found this tucked away in a back corner of the museum-it is actually part of the flight simulator computer for a Vickers Viscount and stands about 6 feet tall-in it's time I imagine it would have been a state of the art computer.
Letter to Prime Minister Harper  Sept 27/2011

Dear Prime Minister Harper,I am writing this letter to express my concern over the imminent destruction of arguably one of Canada's most historic landmarks, the Air and Space museum at Downsview which is slated to be torn down and replaced with a hockey rink. This building was the original home of the DeHavilland Aircraft company and over 1500 Tiger Moth aircraft were built within it's walls-arguably one of the most famous Canadian aircraft designs. It was also the home of Canada's first jet fighter squadron, not to mention countless other historic aircraft. If there was ever a suitable home for the only Avro Arrow replica, it is within the walls of this building. Please visit this museum to understand it's legacy to Canadian aviation and assist making it a designated historic site so that it is not destroyed by short-sighted land developers. I'm sure the building could be incorporated into any existing development without it's destruction.