Planes of the Bronze Age

-As a collector of airplane ashtrays, I would be remiss not to include a page on Bronzart models-since my ashtray page is getting rather unwieldy, I will post this subset of airplane models here, and perhaps add additional pages in the future. Tom Sanders of Sandman Overhauls has kindly provided the content here since my collection is rather sparse for these. As Tom points out, not all vintage metal airplane models ended up on ashtrays. Bronzart was all over the map with their stands. The few that show up these days are mostly without stands so one has to be patient and wait or come up with other solutions.  Here is a group of the current population in Tom's shop… 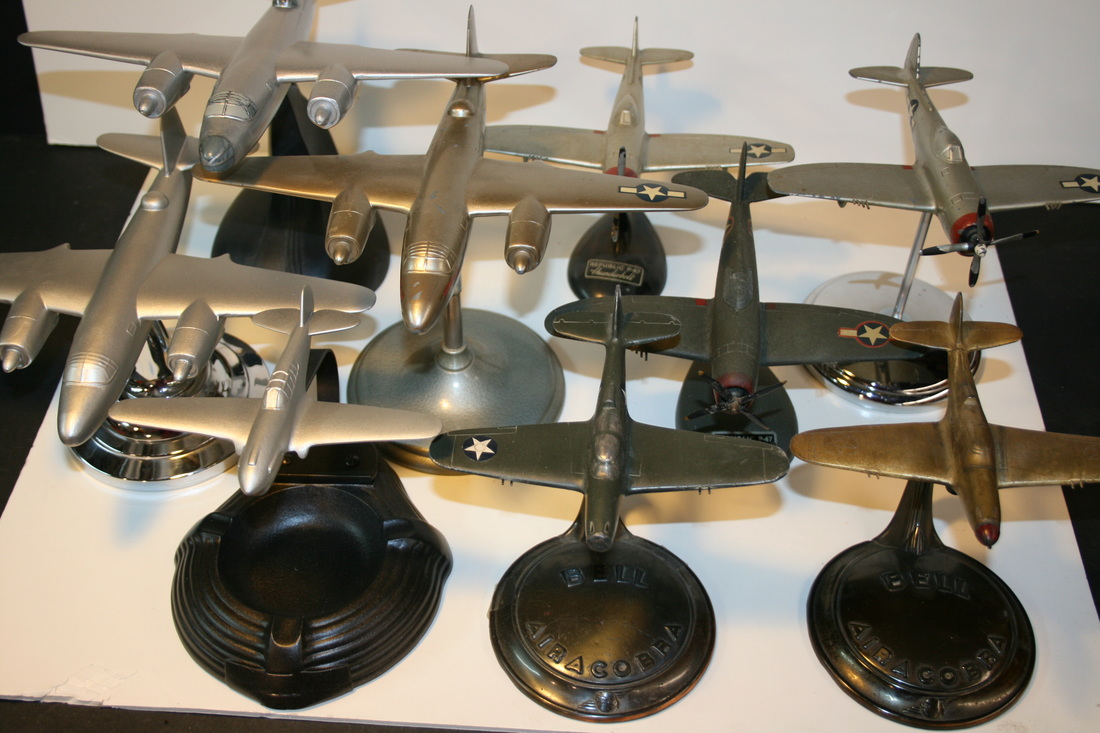 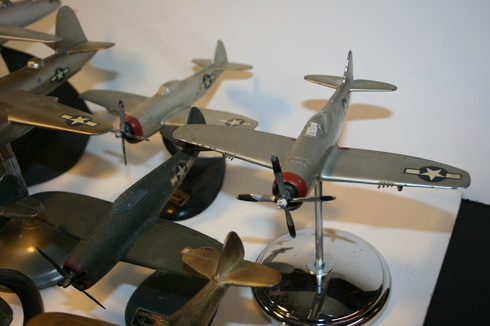 in Tom's word's
"I don’t own all of these and many are only here temporarily. There are enough, though, to grab some group photos-

B-26A: 3ea
P-40C: 1 ea (may be the rarest of the bunch)
P-39: 2 ea
P-47C: 1 ea (a second with original wheels is currently going through a ground-up resto)
P-47N: 2 ea (of these, one has its original ashtray on loan to another restorer)
I missed the F4U that came up recently, my bad. It is interesting to note that Bronzart focused on east coast manufacturers such as Vought, Curtiss, Bell, Republic and Martin as they knew where their bread was buttered. These were all produced in 1/72 scale after they lost the recognition model business with the military. These were usually produced in two paint schemes, Bronzart Gold/Silver and in olive drab. Only the F4U corsair came in dark blue/gray. Five of the models here have their original stands.  It is interesting to note that many aircraft illustrators during the war purchased Bronzart models in lieu of trying to find full-scale samples.
Later on after the war was over, Bronzart produced other models for Boeing and west coast companies in 1/144th scale. Needless to say these are fragile but heavy beasts that must be handled with some caution. 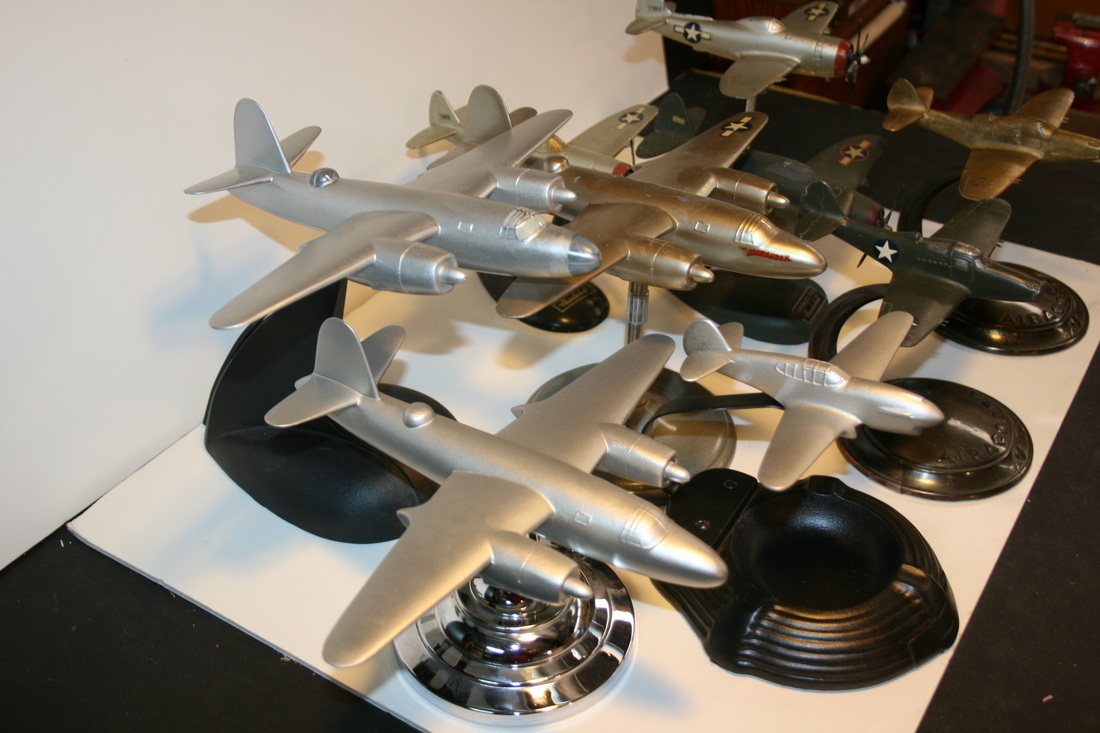 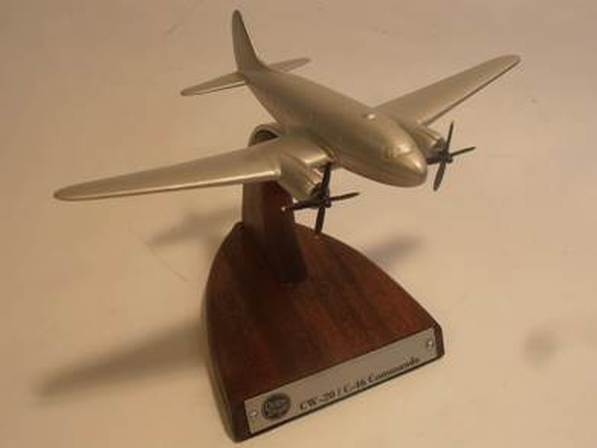 Another of Tom's beautifully restored models, Tom writes, "This one is the 1/144th scale version of the Curtiss C-46. Note it is the version with the stepped windshield meant for attracting post-war commercial sales.  Again, the typical issue of the missing stand. This stand is mahogany with an added spine for attaching the model. Bronzart did not usually do more that paint the model although some did occasionally receive decals depending on need for marketing". 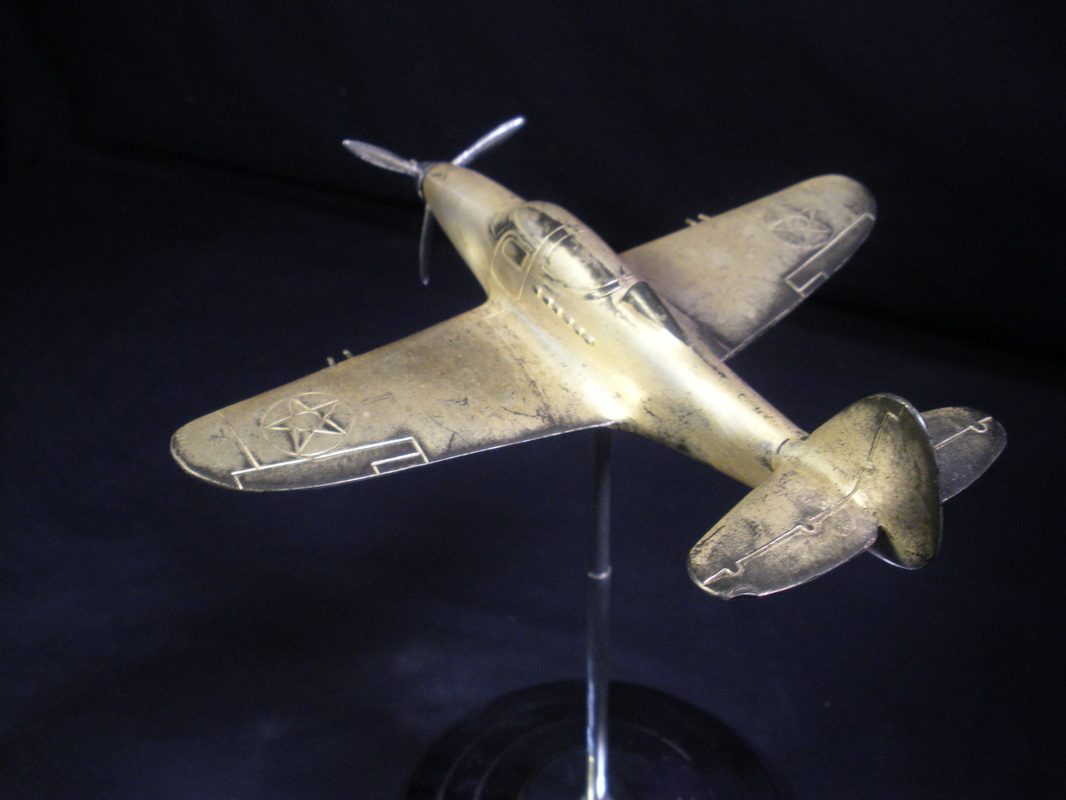 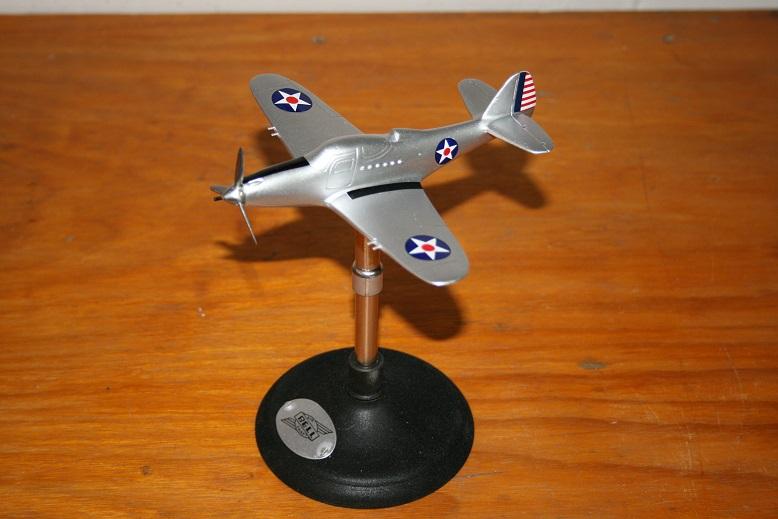 Another P-39 restored by Tom, this one a Bronzart XP-39. Ex-Recognition Model. Purchased and displayed at bell's NY plant by an employee 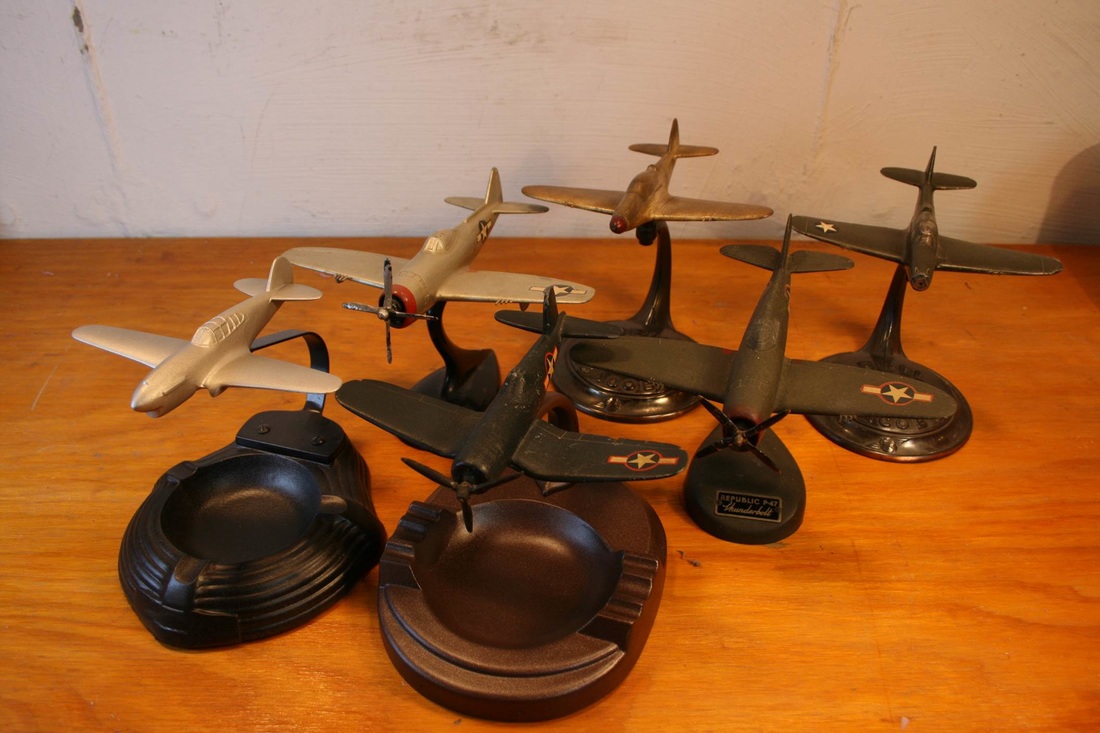 Complete set of all the Bronzart WW11 fighter planes. photo courtesy Tom Sanders
Bristol Beaufighter Recognition Model (above):
Tom reports that this model was purchased with the tail section broken off and attached with old masking tape before restoring it, but was able to use a combination of epoxy and super glue to permanently re-attach the twp sections. He also installed a Blind Jack Nut in the belly so that the model could be attached to a display stand. The client wanted to have it painted as a night-fighter.
This is another of Tom's projects, a Martin 2-0-2...

Tom reports that this model was purchased with a chunk cut off the front of the fin and many layers of paint. The repair took some time but the fin has been replaced with the correct profile. The props were missing as was a stand: 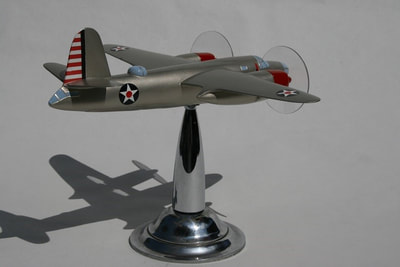 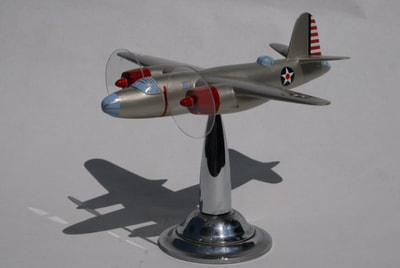 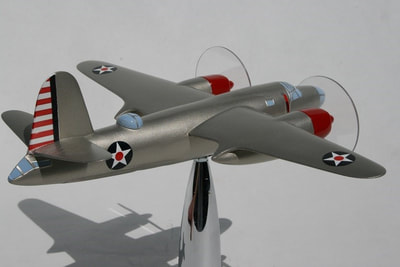 Tom reports on his beautifully restored B-26 " ​The Bronzart B-26 Marauder was faithful to the first production model that includes the prop spinners and short fin.. They produced many of these models and they survive in a good quantity. They come with Bronzart's special Silver/gold "bronze" paint and a pair of decals. Some came with ashtrays, some with a simple stand and others were sold to Martin without any stands at all. When Martin built and opened their new plant in Omaha, NE, they quickly built a Strombecker recognition model for display in the front office waiting area. Later on a Bronzart was used as a replacement and I have overhauled one as it would have been on their display."
Below, a rare Bronzart B-45 Tornado in for stabilizer straightening... 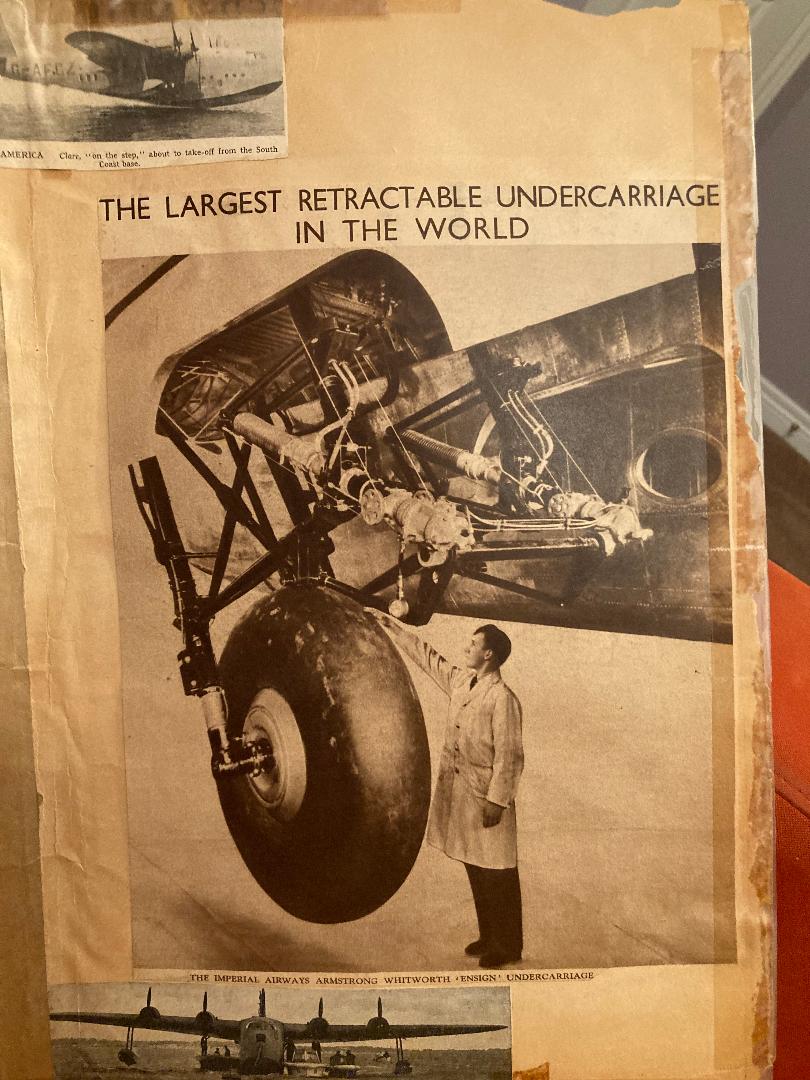 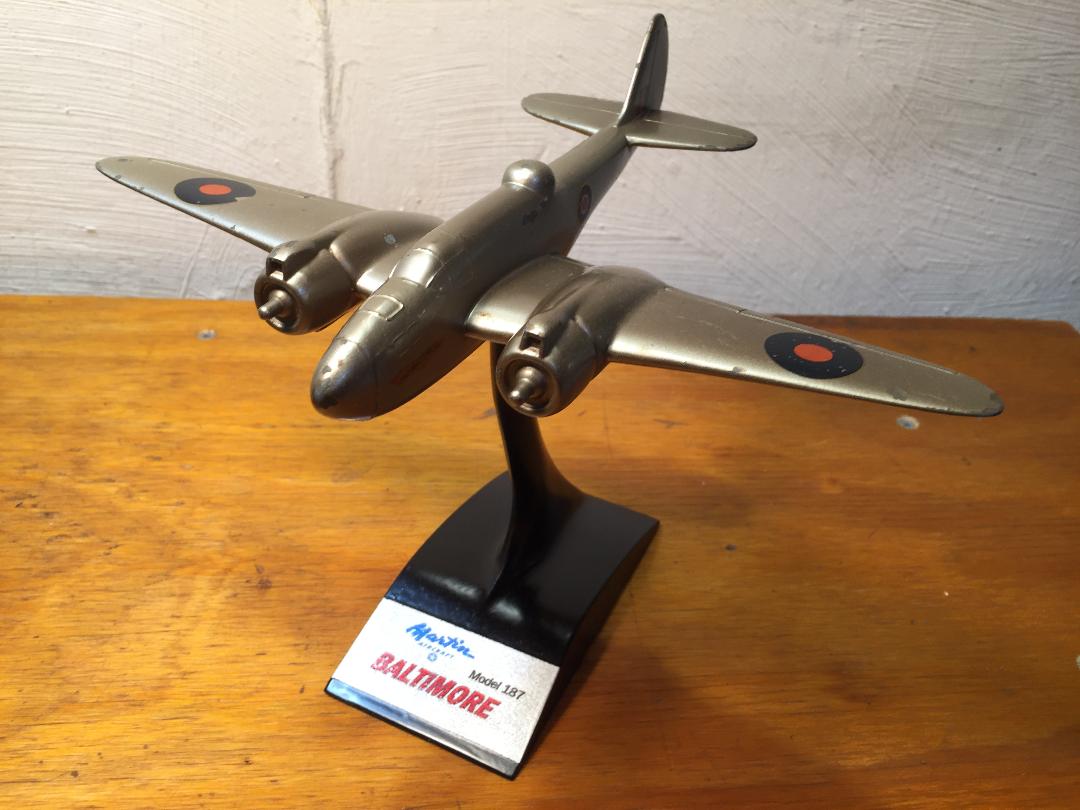 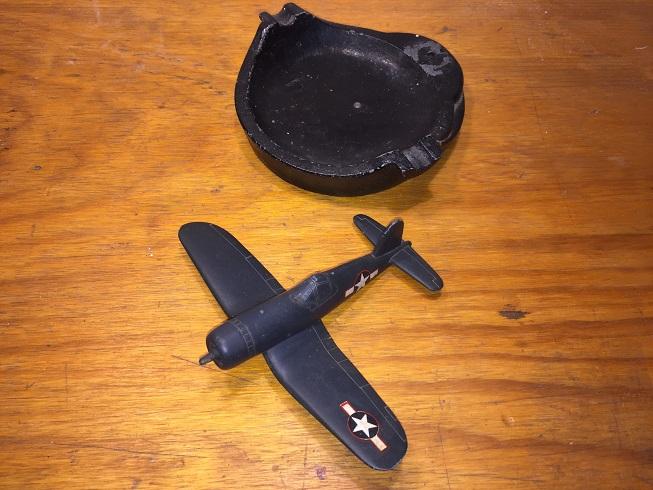 An F4U Corsair, the only Bronzart model done in the blue colour scheme... 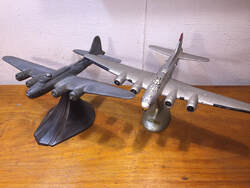 Two rare B-17's; an E and G version.
From Tom:  ​I have been doing some research on a products called DAKA-WARE made by Davies Molding (Still in operations)  http://www.daviesmolding.com/Pages/Company/About-Us.aspx

During the 1940's they got started making various plastic products (phenolics) including various
styles of ashtrays-
https://www.ebay.com/sch/i.html?_from=R40&_trksid=m570.l1313&_nkw=DAKA-Ware+ashtray&_sacat=0


If you troll through these, it appears that they would contract to make ashtrays with embossed logos and lettering.

I found a unique pair, one has U S Navy CORSAIR and another that says US ARMY THUNDERBOLT. I suspect these were made for aircraft companies, Vought and Republic. Made sense to complete both as they would have been finished using Bronzart models- 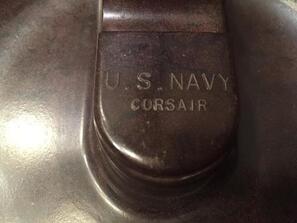